With a variety of timepieces to choose from, you will find what you need with a classic Blancpain timepiece. Men’s watches, women’s watches, watches with double time zones, or underwater watches for divers - every collection uses innovative, quality materials, prepared exclusively with the customer’s satisfaction in mind.

Blancpain is the oldest Swiss watchmaker still active, as it has been founded by Jehan-Jacques Blancpain in Villeret, Switzerland in 1735.

However, as the company went “dormant” for some periods, the purists consider Vacheron Constantin (from 1755) the oldest watchmaker in continuous operation.

Part of the Swatch Group since 1992, Blancpain is best known for its perfect workmanship and its amazingly complicated models. One of its most iconic models, along its Grand Complication from 1992, is the Fifty Fathoms, launched in 1952 concurrently with the Rolex Submariner. 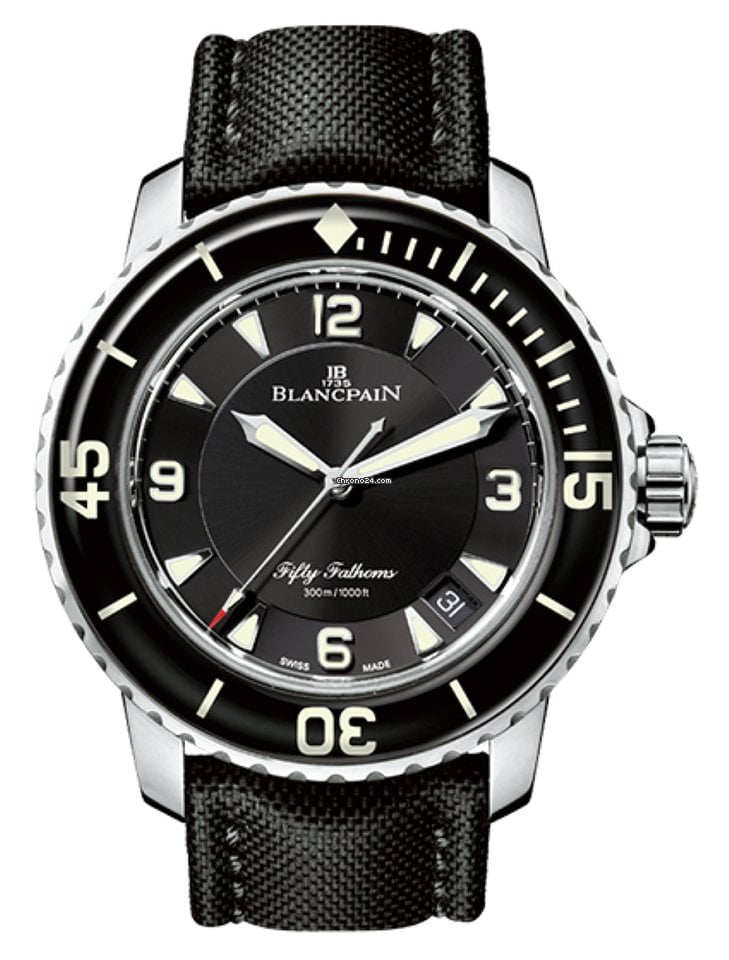 Jehan-Jacques Blancpain set up his workshop on the upper floor of his house in Villeret.

But it was only with his grandson Frederic-Louis, in 1815, that the watchmaker transformed itself into a proper manufacturer. Frederic-Louis introduced the concept of industrialization into the manufacturing process, as well as focusing on modern innovations in watchmaking, like the cylinder escapement. This allowed him to build a factory next to the river Suze, and gradually expand its production.

By 1926, the company started a partnership to distribute the first automatic wristwatch, and by 1932, the last member of the Blancpain family, Berthe-Nellie, sold the company to two of its executives.

By 1950, the company was making around 100,000 timepieces per year and entered a partnership into the SSIH Group with Omega and Lemania so to expand even more. By 1971, it reached its peak at 220,000 watches, but after the quartz crisis, this number sharply fell.

In 1983, Blancpain was bought by Jacques Piguet and Jean-Claude Biver, but the SSIH Group - that later became the Swatch Group - bought the company again to consolidate its brands in 1992.

Fiercely attached to the traditions of watchmaking, one of the company’s mottos is “Blancpain has never made a quartz watch and never will”. Still today, the company painstakingly curates its products one by one - every watch is made by a single watchmaker, and as a result, the watchmaker makes less than thirty watches per day. 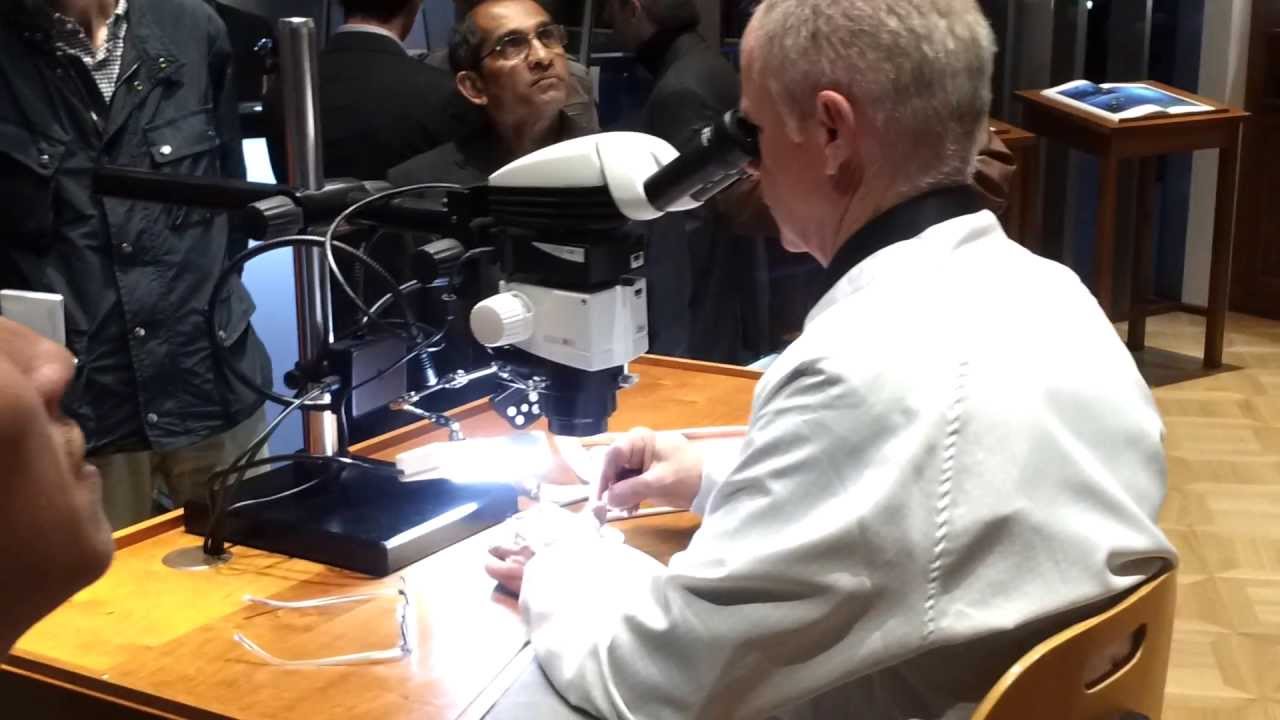 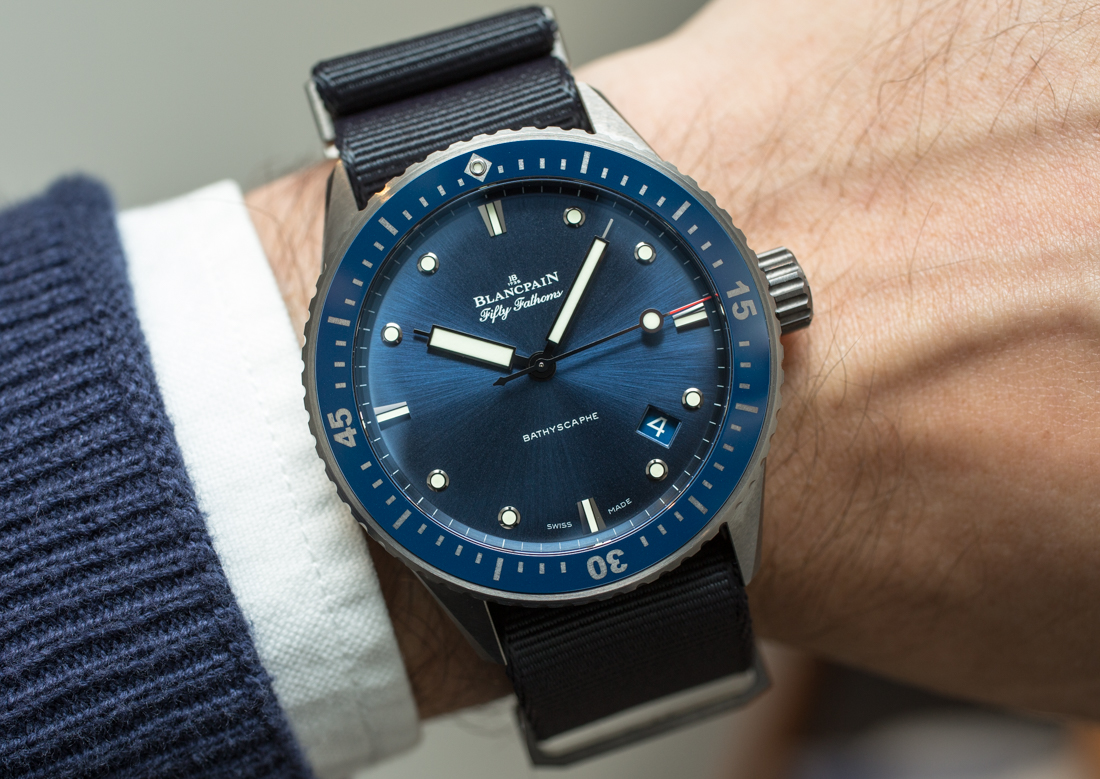 The most notable model of Blancpain is for sure the Fifty Fathoms.

Launched in the same year as the Submariner, the Fifty Fathom was made in cooperation with the French Navy combat divers unit, and was worn by the famous marine explorer, Jacques Cousteau, who used it in the 1956 documentary “The Silent World”.

Its name derives from the fathom, a marine measuring unit of about 1,90 meters, indicating its water-resistance limit.

The Villeret collection is also very well-known since the 1980s, and includes in its ranks a vast array of references, from the most simple to the most horologically complicated, like triple calendar, moon phase, and carousel models. 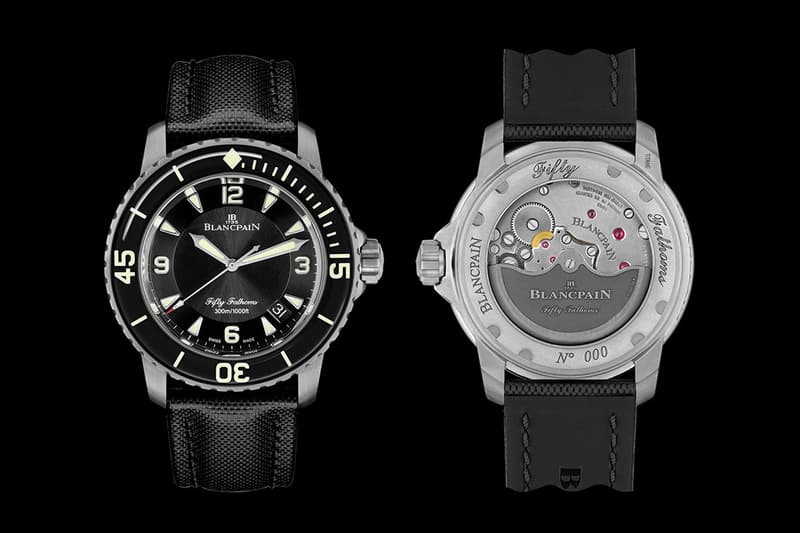 The Fifty Fathoms is the prototypal divers’ watch.

Its large, thick rotating bezel (counter-clockwise only, a safety device guaranteeing that the diving times were always correct) is one of its distinguishing features.

The watch is thought to be the brainchild of the then director of the company, Jean-Jacques Fiechter, who was also a diver. Every detail was thought so to improve the legibility of the dial and make it perfect for its use underwater.

Launched in 1953, the watch became the model of reference for professional divers.

From this moment, the specs of the watch have increased from the original 100 to the modern 300 (and more) meters of water resistance, but the charm of this timepiece stays eternal, untouched by time and trends. 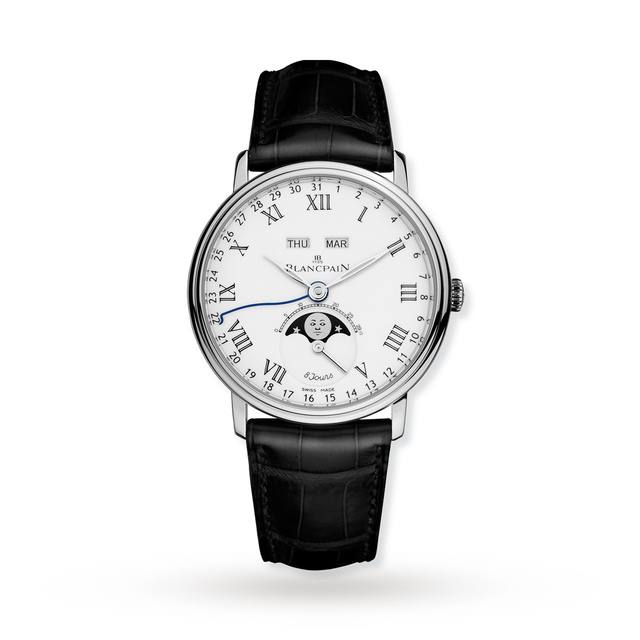 The Villeret is the main collection by Blancpain, and represents its largest, offering more than 100 different pieces of exquisite beauty.

Its name is a homage to the original home of the watchmaker, so it wants to express its tradition in watchmaking. It is composed of a vast array of very classical dress watch models, featuring excellent in-house movements and offering sometimes amazing complications w2hich are bound to please even the most demanding watch fanatic.

Blancpain creates watches with impressive quality in movements and finishings.

The Métier d’Arts is the sub-collection of the Villeret line that house these masterpieces inside amazingly done cases and dials, to become true objects of art in their purest sense.

The collection is almost handmade: that is, relies on a team of artisans who, through the savvy use of smithing and decorating processes and techniques, achieve this excellence in workmanship.

This collection, divided into several lines, offers some of the most exclusive products of the watchmaker. The Léman line, and its follower, the aptly-named L-Evolution, give a more sporty twist to the Villeret collection, making it a sort of mix between the dress watch and the luxury sports watch.

One of the elements that characterize it is the use of bigger, very legible hands, similar to the ones used on the Fifty Fathom.

As for the movements, the Léman features each and every complication that you find in the Villeret collection, so you are not going to miss anything, horologically speaking. 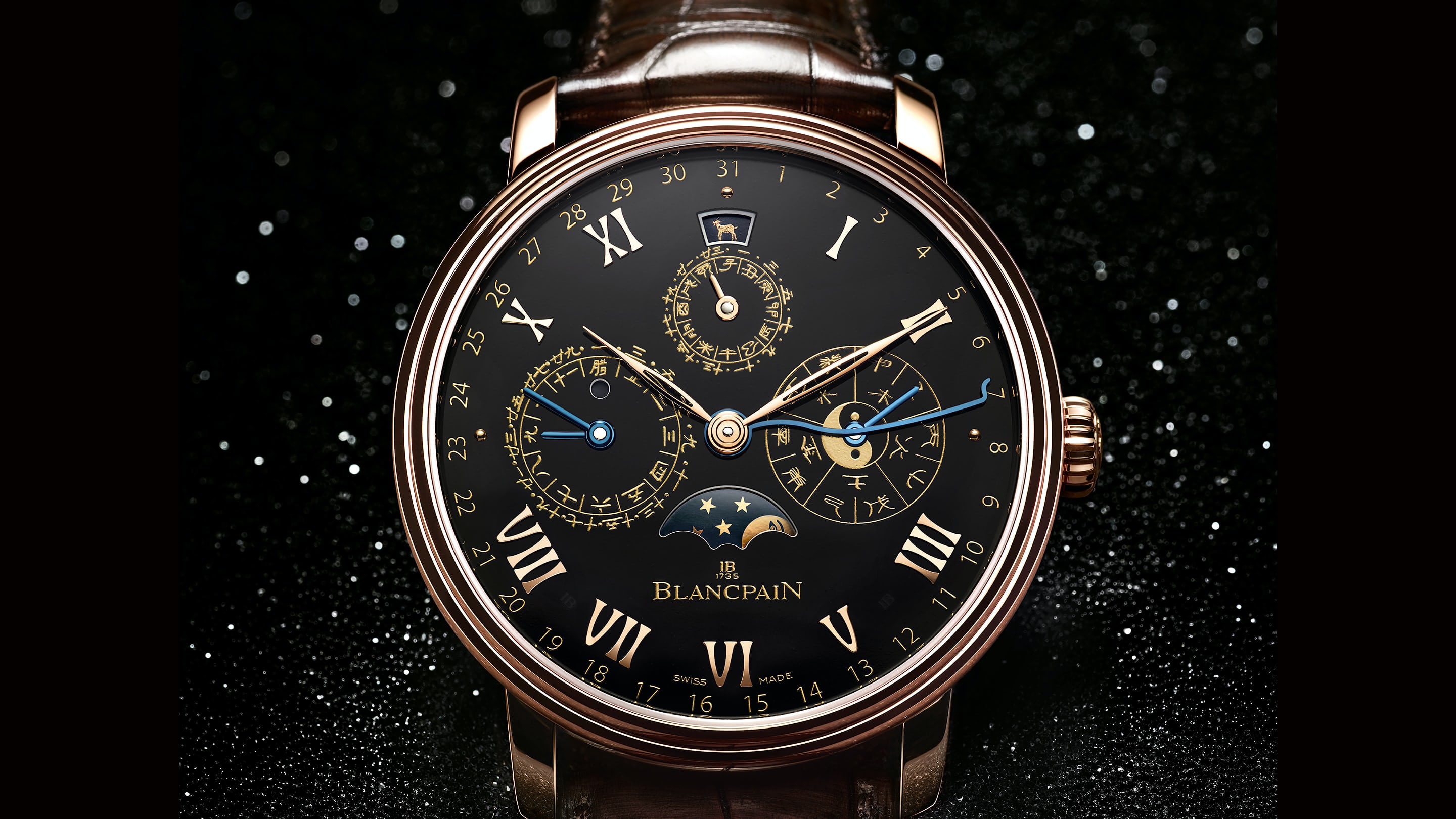 The commitment of Blancpain to Asia is unquestionable. During the 15th day of the Chinese Calendar, the watchmaker has celebrated the first full moon in the Year of the Pig at the brand's Hong Kong boutique.

It was a very auspicious day to release a very special timepiece: the "Traditional Chinese Calendar”, a watchmaking masterpiece combining the fundamental principles of the age-old lunisolar calendar stemming from Chinese tradition with the date according to the Gregorian calendar in a unique, perfect blend of styles and cultures.

In addition, the Manufacture paid homage to the Eastern traditions based on the lunar cycle by displaying an exhibition of selected moon phase models, along with living demonstrations performed by a Blancpain watchmaker. 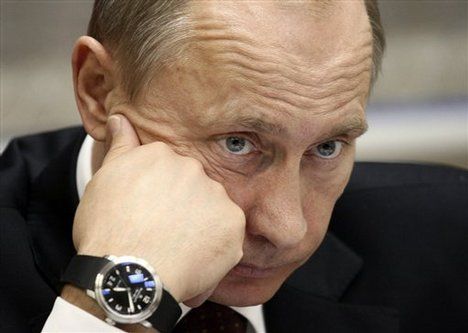 Jan 2017 - Between the most well-known personalities showing a taste for Blancpain, Vladimir Putin clearly stands out. His preference for wearing the timepieces from the watchmaker is well-documented on the media. Also, he seems to enjoy distributing them around as gifts.

He has given one of his Blancpains (worth around $10,500) to a Siberian boy he met while on vacation in August 2009, and he gave another similar one to a factory worker in September 2009.

And last but not least, as an auspicious gesture, he tossed another one in the wet cement of a construction site in 2010.

Between his choices, he seems to like the more sporty looks of the Léman collection: he has been spotted wearing a Flyback and an Aqualung Grande Date. 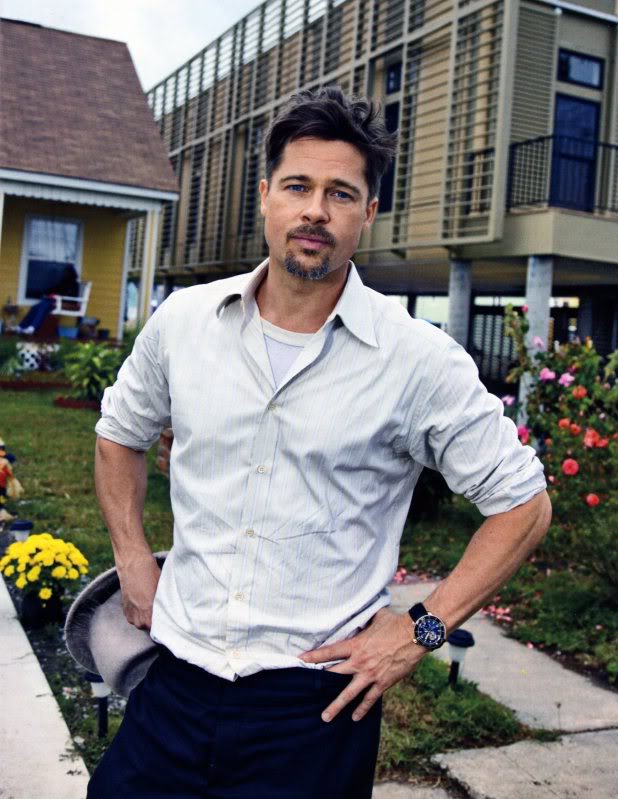 The Hollywood star has some pretty defined tastes, and for sure he loves beautiful timepieces with character.

And on the cover of Architectural Digest, he has been portrayed wearing an awe-inspiring Blancpain: a rose gold Fifty Fathoms Tourbillon (Ref. 5025-3630-52), a gift from his (now) ex, Angelina Jolie.

The Fifty Fathoms traces a line in the sand in luxury sports watches. On one side, the FF owners. On the other, the Rolex owners. So, it is quite difficult to ignore, to say the least.

It has been made in several sub-lines, passing from the merely aesthetically-bound, like the original FF, to the most technical like the 500 Fathoms and the Bathyscaphe.

As a note, one of the enticing factor to be on the side of Blancpain is that, on the contrary of Rolex, the former provides its timepieces with a sapphire crystal back so to admire the beautiful movements at work.

Among the other collections, the Villeret line is the most diffused, and you are going to find an abundant supply of Ultra-plate timepieces on the market, sprinkled by the gems of the collection, featuring the most complicated movements, like the amazing Repetition Minute and the 8 Jours Manuelle, available also in the 8 Jours Tourbillon version.

The Fifty Fathoms is the direct descendant of the original model from 1953.

Now available in a full range of varieties, from the most technical to the most glamorous, the Fifty Fathom represents the ultimate evolution of the luxury sports watch from Blancpain and offers everything a watch aficionado could ask for.

The Villeret is the dress watch icon interpreted by Blancpain. This collection takes the most traditional elements from the watchmaking tradition of the company and presents them in a timeless, beautiful way.

The Léman collection derives its name from the Swiss lake, and offers the Blancpain movements in a more contemporary and sporty version than the Villeret, for maximum legibility and a more relaxed fit, due to the different design of the lugs and the use of bigger, more legible hands derived from the more sporty models of the maison.

Did You Know The World's Oldest Watchmaker Is...

THIS IS ONE OF THE FIRST CURIOSITIES BUDDING HOROLOGISTS ASK WHEN THEY GET BIT BY THE WATCH BUG. UNDERSTANDING HISTORY MAKES US FORESEE THE FUTURE, IT IS SAID. AND ESPECIALLY IN SWISS WATCHMAKING, THE APPEAL OF TRADITION HAS BEEN EXCEPTIONALLY STRONG - IN A WAY LIKE THE RESEARCH OF ANCIENT QUARTERS OF NOBILITY IN THE LINEAGE OF FAMILIES.

What about Blancpain watches?

Blancpain, like so many “Swiss Made” watches, relies on its heritage to add cache to the brand. The watch as a family institution died in 1932 and the name was bought up in 1983. Blancpain changed hands again and was resurrected from the ashes, in 2002 but seems more zombie than Phoenix in its new iteration. It makes little difference that the brand traces its lineage back to the 18th century because consumers are getting a conglomerate’s manufacturing and not the watch’s heritage.

Who do you consider the top dozen luxury watch manufacturers? Are all of them Swiss?

That's very subjective! And NO, not all are Swiss-made! Here's my list of the top dozen:

Who is the world's oldest watchmaker? Is it Vacheron or Blancpain?

A small internet search shows us that Blancpain has been founded in 1735 in Le Brassus, in the Swiss Jura, while Vacheron Constantin hails from 1755 in Geneva.

So, Blancpain is the oldest Swiss company manufacturing watches today.

But the Blancpain brand had some periods of inactivity. This means that if we are searching for the oldest company in continuous operation since its founding, the first prize goes to Vacheron Constantin.

Why do so many watches look like the Rolex Submariner?

As people have mentioned, the Blancpain Fifty Fathoms came out before the Submariner and their aesthetic is near identical.

There are only so many ways to mark the minute/hours on a dial without somebody doing it before. From a design standpoint, Rolex is typically not very adventurous and opts for more reserved.

That said, Rolex has made several iconic watches (like the Blue/Red GMT) that have become widely copied. Part of it is because they looked good. Another part of it being Rolex watches are quite expensive and many want the style without the price.